Remember that first time you put on a VR headset? You were immersed in a virtual world and (hopefully) it was breath taking. Then, if you were in VR for a good amount of tine, when you took off the headset the real world felt… weird. Not right. Something odd about it. That feeling is very common for first-timers and usually goes away within a few minutes. That weirdness is your brain and eyes re-adjusting and switching back to their normal way of operating, after being forced to work in a very unusual manner.

So what is going on?

It’s common knowledge that depth perception stems from the fact that we have two eyes, and we can infer depth from the displacement of objects between the two images. Large displacement (parallax) means close object, small or no displacement means far away object. This is true, but there much more to it. There are in fact a whole bunch of cues that we use to infer depth. Lets talk about two of these.

Eyes are a marvel of engineering. Camera lenses have multiple optical elements, some are movable. To change focus, the elements move in relation to one another. Eyes have only a single element (the lens), but unlike cameras, our lens is soft and squishy. To change focus, special muscles pull or relax the lens, changing it’s shape.

This is called the Accommodation reflex and it’s an important depth cue for objects that are close to us (less than 10 meters / 30 feet).

Our eyes can move independently, and when looking at an object they converge on it. 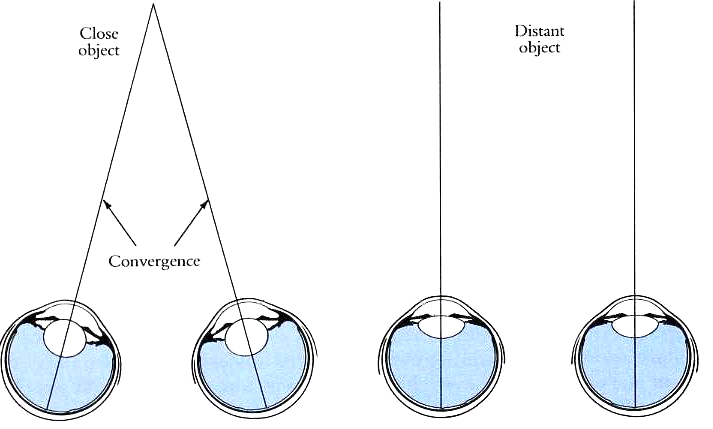 Again, this is another depth cue.

In the real world, Accommodation and Vergence are always in sync. VR is a different story. In a VR headset the screen is in a fixed distance from your eyes, usually around 3 meters (9 feet). The actual screen is of course much closer, but there are some optics in the headset to make it appear as if it’s 3 meters away. Your eyes remain focused on the screen all the time. If a virtual object is a 20cm away, your eyes are converging on a spot that is 20cm away but they are focusing (accommodating) on the screen which is 3 meters away. This is totally wrong and never happens anywhere except VR headsets.

If you have a VR headset you can easily test this. Go into a VR environment and look at something on the horizon or far away. Now hold up the controller to your face. Note how both the controller and the horizon are in perfect focus. This is optically impossible and your brain is actually freaking out over it.

But wait! Surely 3D movies / TVs also have this problem, and they have been around for a long time. This is correct. However, the big difference is that 3D displays don’t block out the real world and are usually far away from the user. They also cause this conflict, but to a much lesser degree.

As stated, the Accommodation-Vergence conflict is the reason why the real world feels weird after being in VR. It’s also the main cause of eye-strain / headaches, and some people are more sensitive than others. I’ve seen reports of VR users losing depth perception for hours, and even days, after a long VR session. While in adults this is probably temporary, it does raise concerns in regards to children.

How does prolonged exposure to the Accommodation-Vergence conflict affect a developing visual system (ie, kids)? Nobody knows. There’s no real data or studies on this topic, which brings me to the most important conclusion of this article:

Limit children’s exposure to VR. Until we know more, it’s best to err on the side of caution. Short exposure is probably fine, but don’t let them spend hours in there, and insist on frequent breaks.

What about VR in education? Yes, this is a big problem. On one hand, VR can be an amazing tool in education, on the other, it also might cause permanent vision problems. Moderation is key, and if you are an educator I will lave this decision in your hands.

I’m aware of this study, which showed a small improvement in vision when they tested a small group of kids for a short period of time. However, they did not test depth perception, which is the main area of concern.

The good news is that the Accommodation-Vergence conflict is solvable, and the solution is lightfield technology. I won’t go into much detail here, lightfields are damn complicated, but I will say what they solve the conflict and will allow for multiple planes of focus and more natural eye behavior in VR. However, the technology is still in it’s infancy and it will take 3-5 years before we see it in consumer VR headsets.

Written by Shachar “Vice” Weis, founder and CEO of Packet39, Virtual Reality training solutions for the manufacturing and power industries.